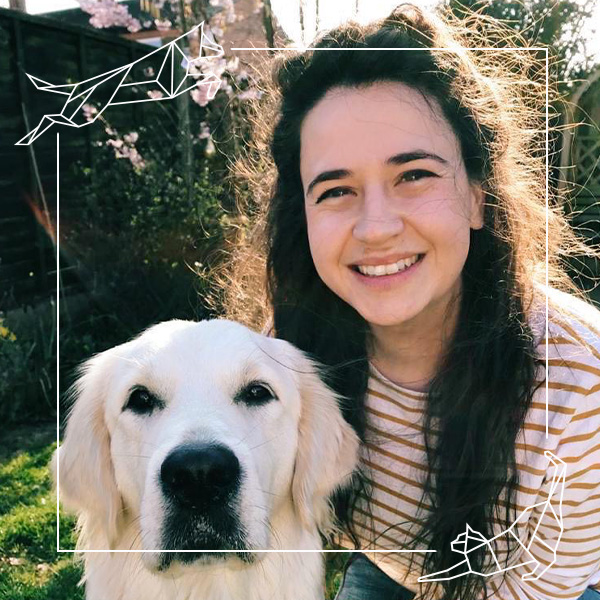 Georgina graduated in 2012 and has dedicated her career to small animal practice. Prior to becoming a Director at Eden Vets, she gained a wealth of experience within first opinion and referral practice. She successfully achieved the BSAVA certificate in Small Animal Surgery with RCVS Advanced Practitioner status approval. Georgina is passionate about all aspects of veterinary health. Her particular area of specialism is orthopaedic and complex soft tissue surgical cases.

In her spare time, Georgina loves nothing more than spending time with her fiancé, Ash, and golden retriever, Margot, enjoying the countryside and her garden, but she is also has a passion for dermatology.

Kate graduated in 2008 and spent the first four years of her career following the James Herriot dream, mixing both farm and small animal work in the beautiful Peak District. After four years though, she concentrated on the area she had become passionate about, gaining the RCVS certificate in Small Animal Medicine in 2016 and later becoming a recognised Advanced Practitioner in this field. For the last year and a half, prior to creating Eden Vets, her job has been in referral work and as such she has a wealth of experience in dealing with complex and difficult cases. In addition, Kate is also passionate about emergency and critical care so your very sick animals are certainly in safe hands.

Kate lives very locally in Shavington itself and has two young children, who both attend the local primary school. Her family and pets (a rescue dog, Rio and cat, Milkshake) make for a busy but happy life outside of work. 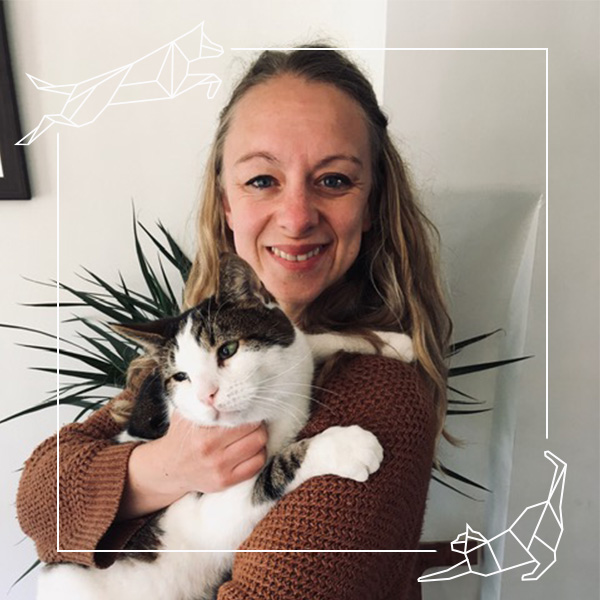 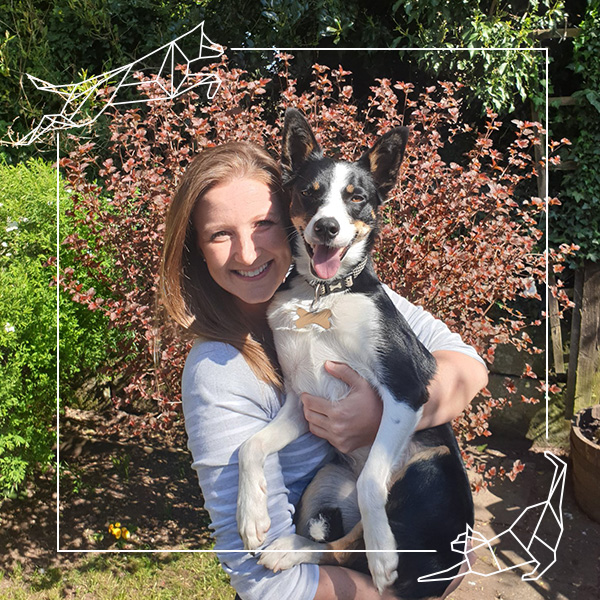 Eve graduated from the University of Liverpool in 2013 and has devoted her career to small animal practice, working extensively in both first opinion and referral medicine settings. With a love for diagnostic imaging & complex medical cases, Eve completed the RCVS certificate in Small Animal Medicine and has since become a recognised Advanced Practitioner in this field.

Recently married, Eve lives locally in Wrenbury with her husband Andy and is kept busy looking after their energetic Border Collie Nellie, cat Davos & Marvin the tortoise. Eve also loves to bake – something the rest of Team Eden love!

Tom graduated from Liverpool Vet School in 2004 and started work as a small animal vet locally in Nantwich. He gained the Certificate in Small Animal Surgery in 2008 and became a recognised Advanced Practitioner in this field at the inception of this accreditation in 2015.  In 2017 Tom set up Gilding Veterinary Orthopaedics – a service that provides mobile specialist orthopaedic surgery to first opinion vets throughout the Northwest of England.  Tom now divides his time between there and Eden Vets clinic, so that as many animals as possible can benefit from the expertise he can provide.

In his spare time, Tom is kept busy with his human and animal family. His three boys Finn, Gabriel and Theo keep him on his toes, the dogs Grace, Sprite, Tick and Rabbit ensure he remains active, whilst Jinx the cat tolerates him with her occasional loud meows when it’s time for food! With what little time that remains, Tom also likes to garden and occasionally paints and produces fused glass art work. 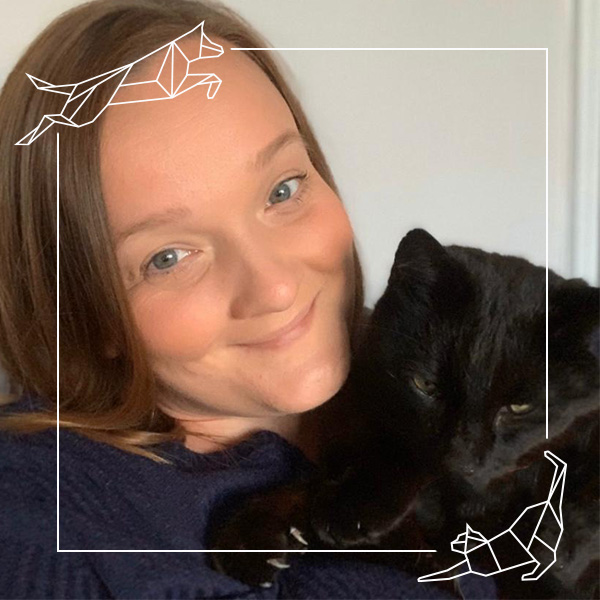 Nic qualified as a Registered Veterinary Nurse in 2010 and for the past 9 years has worked within first opinion and referral practices. In 2018 she joined the team at Gilding Veterinary Orthopaedics where she provided organisational and clinical assistance to Tom within his busy mobile orthopaedic service prior to becoming head nurse at Eden.

As head nurse Nic leads our fantastic nursing team. Her abundant knowledge, brilliant organisational skills and considerable enthusiasm for all aspects of nursing are a great asset to our team. Her particular areas of interest include nursing of the surgical patient and multimodal anaesthesia techniques to ensure excellent pain control for surgical cases.

Outside of work Nic enjoys spending time with her husband Tim and their two sons; Jack and Oliver. Most of her spare time is dedicated to watching Jack play football or taking Oliver to gymnastics! Nic has a hamster called Timothy and 5 years ago rescued a semi-feral stray cat, whom she called Pete – it’s taken a long time but he finally enjoys all the attention being in a family can bring!

Emma has always had a keen interest in diagnostic imaging, medical nursing and emergency care. Wishing to further her knowledge and skills she studied for the RCVS Diploma of Advanced Veterinary Nursing which she gained in 2010.

Emma lives locally with her husband and their two daughters. Most of her spare time is spent running around after the children usually to a swimming pool as she’s a swimming club mum! Over the years Emma has had the pleasure of owning a menagerie of animals including horses, dogs, cats and several small furries! They currently share their home with their two dogs, Stanley and Darcy plus two guinea pigs and a hamster! 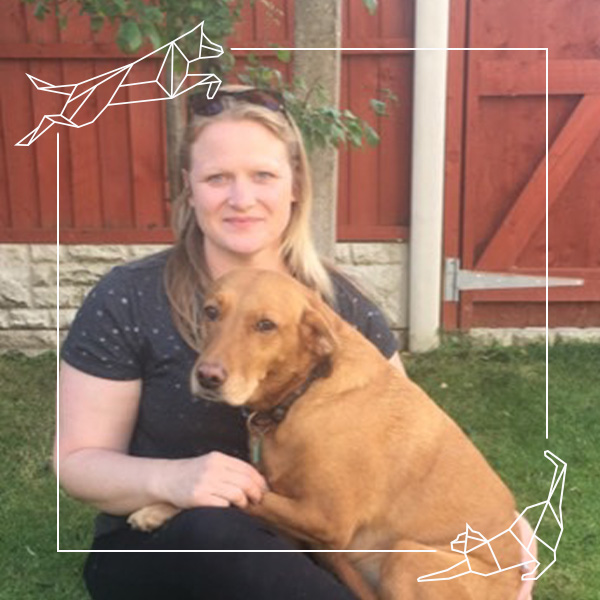 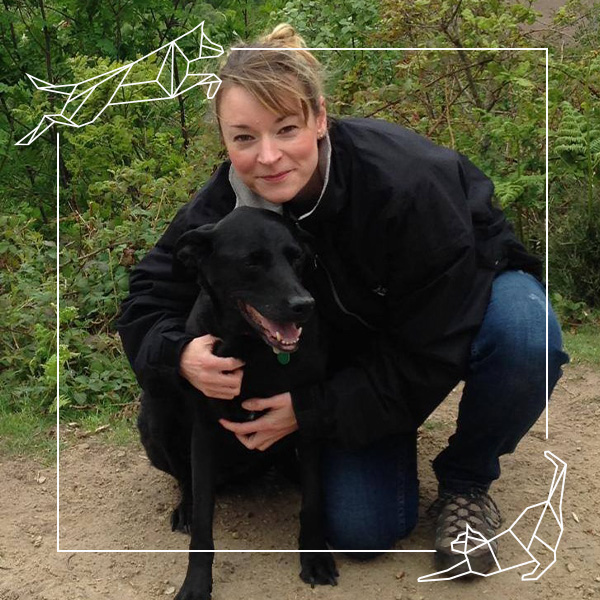 Laura started her career within the veterinary world in 1999 working as a weekend kennel maid while completing her A-levels. In 2001 she went on to start her training and qualified as a Registered Veterinary Nurse in 2003.  Laura then concentrated on gaining a wide range of skills in all aspects of veterinary nursing whilst working within a busy first opinion and referral hospital. Alongside practicing the essential nursing skills, she completed certificates in veterinary dentistry, general management and the assessment of student veterinary nurses.

During her time in practice, Laura developed a keen interest in the management of anaesthesia and surgical nursing. Being eager to further her skills in these areas Laura studied for and gained the RCVS Diploma of Advanced Veterinary Nursing in 2010. During this period Laura was also promoted to the position of deputy head nurse and assisted in the management of a large nursing team.
In 2019 Laura joined the Gilding Veterinary Orthopaedics team, working alongside Tom and Nic.

Over the many years of her career, Laura has had the great pleasure of rehoming a number of stray pets including a one-eyed cat! She has recently however swapped looking after the waifs and strays of Cheshire to care for her baby daughter, but looks forward to returning to work with the exciting new team at Eden Vets after completing her maternity leave.

Zoë started her veterinary nurse training in 2014 in her home country, the Netherlands. In 2015 she came over to the UK for a placement at a busy veterinary hospital in Hertfordshire and enjoyed being here so much that she decided to leave the Netherlands behind and move to the UK permanently to work as a registered veterinary nurse. Zoë’s main work interests lie in canine behaviour, diagnostic imaging, laser therapy and inpatient care.

Zoë has recently moved from Bishop’s Stortford, Hertfordshire to Hodnet, Shropshire with her partner Phil. In her free time she likes singing, dancing and painting. She also spends a lot of time riding and taking care of her horse, Sky and exploring the countryside with her rescue dogs; Kajika the American Indian Dog and Suki the Saluki cross.

Zoë is super smiley, bursting with enthusiasm and has big ambitions.  She recently won the ‘Veterinary Nurse Hero 2020’ award after being nominated by her old practice for being such a valuable member of the team! 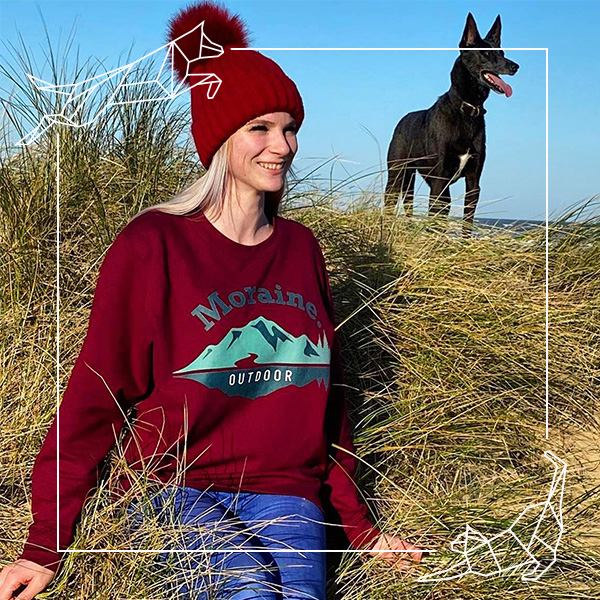 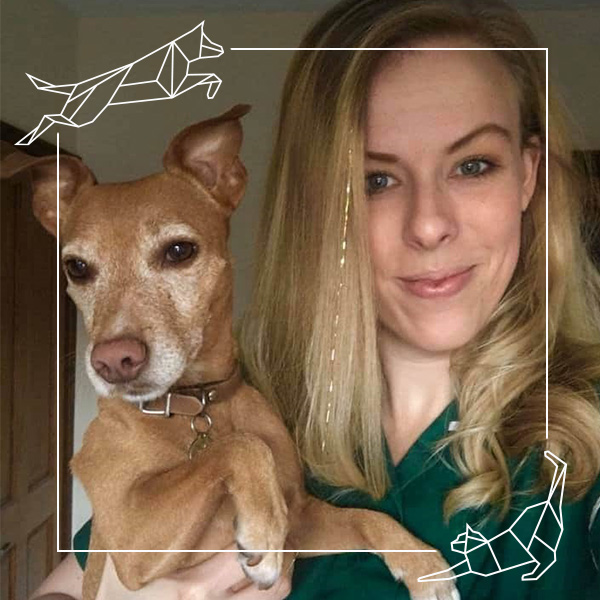 Rosie Qualified as an RVN in 2017 after completing her training in a busy local small animal practice. Since qualifying she has gone on to complete her Veterinary Nursing Certificate in Emergency and Critical care, which remains her main area of interest. Rosie is always keen to build on her knowledge and is keen to further her studies at Eden Vets.

Apart from a few years spent living in France, Rosie has remained local to the area and lives in Williston with her young daughter Freya. A passion for animals and their care has always been a huge part of Rosie’s life and is kept very busy at home with her small pack of rescue animals to include; a deaf Staffy called Ginny, two feisty terriers, Amber and Tonka and finally two elderly cats, Arthur and Parcelforce.

Leah graduated as an RVN in 2019 after studying at Nottingham Trent University. She is the youngest member of our nursing team, full of determination, ambition and passion for the job. She moved to Eden from another large and busy veterinary hospital so is very experienced at dealing with busy days and complex cases. Leah is particularly interested in Internal Medicine and Emergency and Critical Care and already since qualifying Leah has gained the BSAVA merit award in medical nursing and hopes to keep expanding her knowledge in this area with further additional training and qualifications.

Leah lives in Delamere with her partner Alex and dogs, Bruno and rescue Ruby. Outside of work Leah spends a lot of time training her young horse Winston, who she hopes to start competing next year. She also, like many of us, enjoys walking in the beautiful Delamere forest with her dogs. 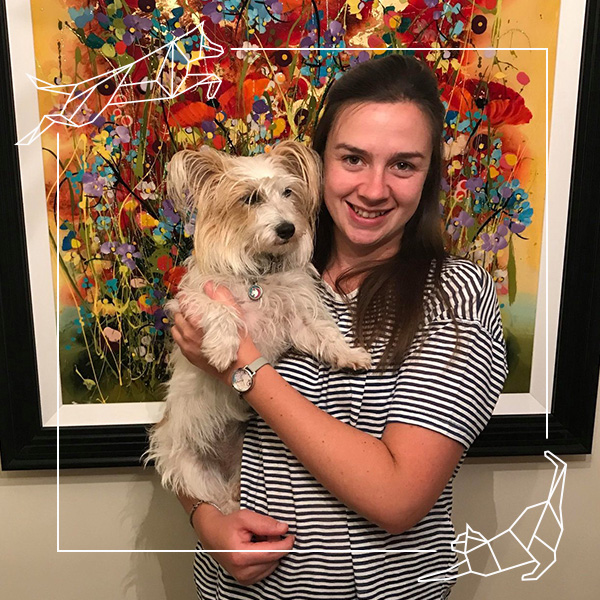 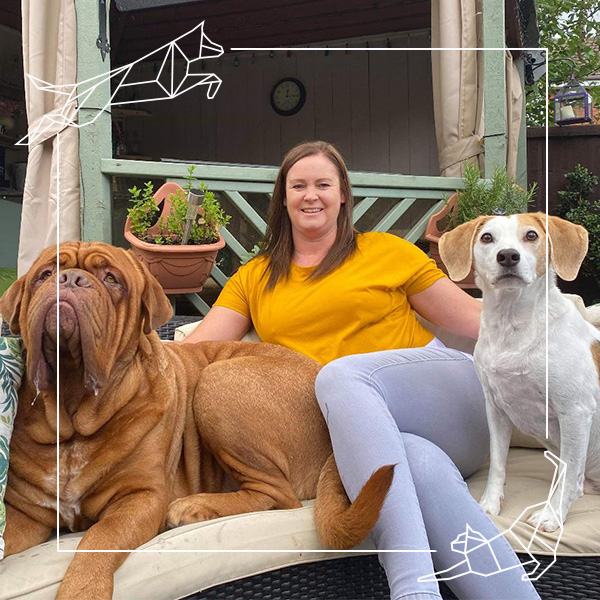 Nicola qualified as a veterinary nurse in 2018 after completing her training at Rodbaston and Reaseheath colleges and working at another local veterinary practice. She is especially interested in radiography and dermatology and has a particular soft spot for large breed dogs.

Nicola has lived within a ten mile radius of Shavington all of her life. Together with her husband Stuart they have raised their family locally and run a family business in Wolverhampton. In her free time she enjoys reading in her private bar “The Dogue and Witch” at the bottom of her garden and taking care of her dogs; Handsome Rob a Dogue de Bordeaux and Alfie Beans her rescue Beagle.

Michelle joined the Eden Vets team after beginning her career as a veterinary receptionist in Shrewsbury in 2017. She had a vital role in assisting her former practice with their initial set up and it was not long before she became a highly valued team member.

Michelle lives in Shropshire with husband Steve, two teenage boys, Michael and Jack and an ever-growing assortment of dogs – Mavis the French bulldog, Arthur the Staffy cross Labrador and Molly the Puggle, all who love endless cuddles! Michelle enjoys trips to the beach and playing netball, but mostly spends her free time watching her two sons play football and rugby. 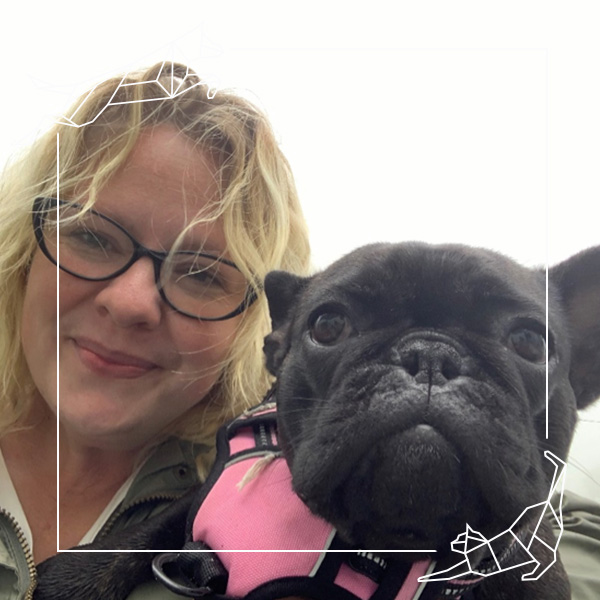 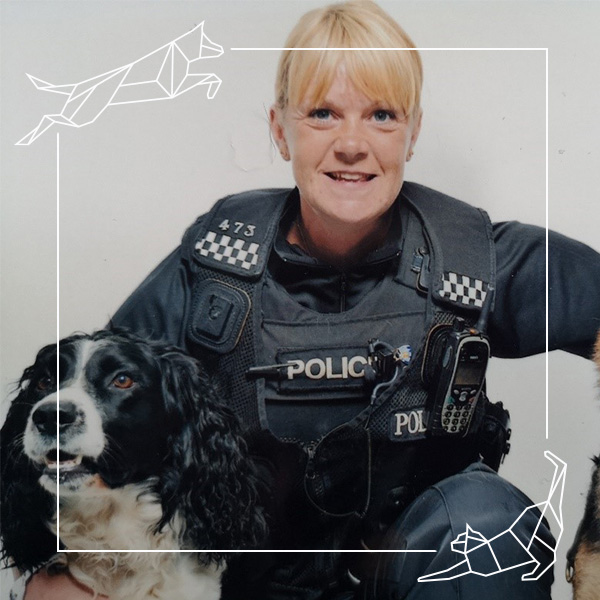 Jools is passionate about helping people and their pets. Before joining the team here at Eden, she spent two years working as a receptionist in a busy referral hospital in Stoke-on-Trent.  Prior to this however, Jools has had a 30-year career as a Police Officer, where combined with her love of dogs she worked as a dog handler for 15 years. One of Jools’ police dogs, an English Springer Spaniel named Alfie, was voted Britain’s best police dog upon his retirement in 2013!

As children, Jools & her sister had always wanted a dog but their parents always said no…. so to make up for this Jools has looked after and owned 17 dogs over the years! Jools currently owns a German Shepherd, Bailey, and English Springer Spaniel, Rosie. Oh and 2 goldfish who are 13 years old!

In her spare time Jools is on the committee for the Staffordshire Retired Police Dog Fund.  They raise money to help look after our hero’s with paws who have dedicated their life as working police dogs. They all retire either through ill health or age and the fund is there to help pay the bills.